2018 is slowly creeping up on us and is rapidly emerging as a major milestone in the encyclopaedic history of London Bridge when a number of key projects will come to fruition.

Thank you to Dan Taylor for contributing this article. Dan Taylor is a Programme Manager in the regeneration team at Southwark Council working to coordinate projects in the London Bridge, Bankside, Blackfriars and Elephant and Castle areas, and maximise benefits for local residents and businesses.

The largest of these, which has arguably had a catalytic effect on all of the others is the redevelopment of the London Bridge station. The project will increase the capacity of the station from 50m to 90m passengers, but it is far more than just a public transport project. A huge new north south concourse will untangle the labyrinthine maze which has for centuries created a vast barrier between the river and the communities to the south. The new routes will be lined by 70,000 square feet of retail in a mix which promises to be just as good if not better than Kings Cross and St Pancras stations.

The station will become a destination as well as a transit hub, with the Southwark Playhouse moving back into the atmospheric arches, and opportunities for local operators up for grabs through the planning agreement between the local council and Network Rail.

To the south of the station, a very exciting project is taking shape which will transform the front doors of the Kings College and Guys Campus. Boland House and the Guys Courtyard are being transformed to create a new home for the Science Gallery London, with a new public square to rival the Royal Academy and Somerset House. More than 300,000 visitors a year are expected to come and discover the dynamic event programmes, a unique offer for the area, and for London.

Further improvements to the Guys estate are well underway with the construction of a world class Cancer Centre brimming with innovation which opens this year. The rich history of the area continues to amaze and surprise and the story of a Roman boat found at the site is to be told by a clever piece of public art in front of the new building.

To the west of the station the organic success of Borough Market continues to evolve. The Trustees of the Market are working with partners to carefully shepherd the area to retain its' unique and historic identity. Park Street has recently been lovingly restored by long serving charity United St Saviours with a very special mix of quality retailers including a handmade spectacle maker. The retail offer and permeability of the area will be further strengthened by the redevelopment of Vinopolis which will create a new pedestrian route from the river into the heart of the market. 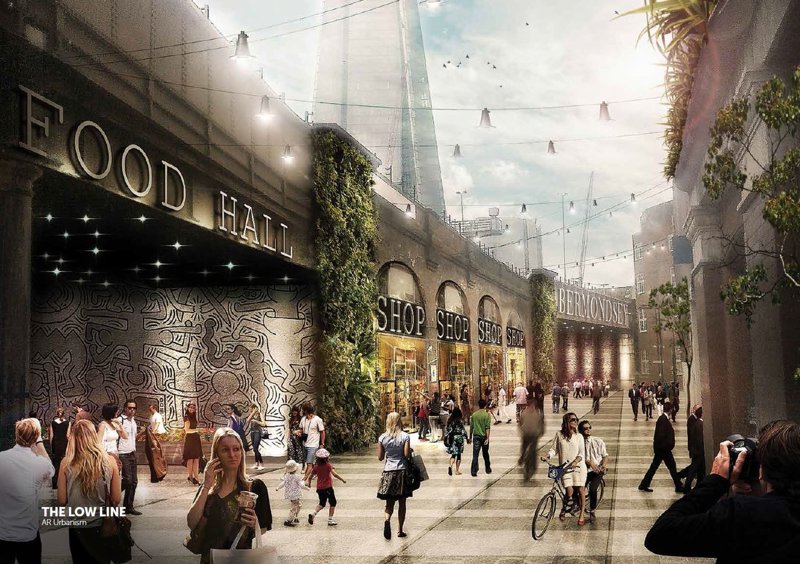 Moving along the river, the owners of Hay's Galleria are putting together plans to revamp their estate in time for the station opening in 2018. Investment in public realm, retail and event programmes will revitalise the historic wharf buildings and improve the connections between the station and the river.

The centre of gravity of the station is also shifting east as the new station concourse opens up access towards Tower Bridge. The final phases of the One Tower Bridge redevelopment will be complete by 2018 with a fantastic new 900 seat theatre to be operated by the London Theatre Company.

Finally, teaching rooms and prison cells are being converted into two new boutique hotels for the area by carefully restoring the historic listed buildings of Lambeth College and Tower Bridge Magistrates Court.

Without any masterplan, London Bridge in 2018 is organically emerging as a fascinating mix of world class projects linking to a 21st century station.

“PERHAPS THE BEST WAY OF SUMMING IT ALL UP IS TO SAY ‘AN OPENING UP’; OPENING UP A NEW CORRIDOR THROUGH THE STATION TO THE THEATRES, MARKETS, SHOPS, HOSPITAL FACILITIES, UNIVERSITY BUILDINGS, HOTELS, OFFICES, AND THE HOMES IN THE COMMUNITIES BEYOND.”

Hundreds of employment and business opportunities for local residents and enterprises, and a range of new cultural amenities. Who would have thought it is all just a short walk from the river to the Elephant and Castle on the other side of the railway tracks?