2014 was an exhilarating year for The Shard as the building came to life. A plethora of respected, high-profile businesses now call The Shard home, across multiple sectors from finance, energy, corporate, media, legal, luxury brand, education in addition to the hotel, restaurants and visitor attraction. 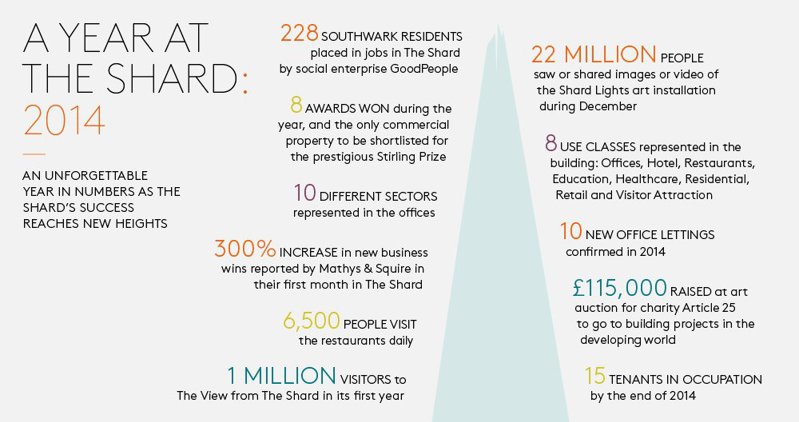 Reinforcing the building's standing as a beacon for modern London, the first of these business tenants was Mathys & Squire, the intellectual property firm. It moved to The Shard in March and experienced a trebling of its new business wins in its first month.

“WE HAVE BEEN DELIGHTED BY THE LEVEL OF INTEREST OUR MOVE TO THE SHARD HAS GENERATED, AND THE INCREASED NUMBER OF NEW BUSINESS ENQUIRIES HAS BEEN MOST PLEASING”

In April, South Hook Gas, the largest importer of liquefied natural gas into the UK, and venture capitalist Foresight Group moved in, while in May, the Shangri-La Hotel at The Shard opened its doors, garnering high praise from critics and guests alike.

Staff at News UK - the publisher of The Times, The Sunday Times and The Sun - began moving into The News Building, The Shard's neighbour in London Bridge Quarter in June. It has since been joined by colleagues on the Wall Street Journal, Dow Jones, and will be joined by book publisher HarperCollins this month.

The leasing momentum continued in July, when three more tenants - Arma Partners, Warwick Business School and Campari - were announced. In August, Arma was the first of these firms to move in.

Yet another world-leading brand was unveiled as a tenant in September, with jeweller Tiffany & Co. announcing it was "delighted" to be taking space in the building.

In October, Warwick Business School started to move in ahead of beginning a programme of open evenings toward the end of 2014 and its first courses in January 2015.

Al Jazeera broadcasting daily news bulletins live from The Shard in November - the same month the building played host to the Article 25 charity art auction, which raised £115,000 for building projects in the developing world.

The year was rounded off with The Shard launching Europe’s highest art installation, called ‘Shard Lights’, which saw the spire of The Shard light up every night for two weeks with a dynamic piece of public art designed to reflect and evoke the spirit, energy and dynamism of London, culminating in a digital countdown and light show in New Year’s Eve.

Images of the light shows were seen by a global audience of over 22 million people via TV, press, online coverage and social media.

The installation was designed as a gift to London to celebrate the year The Shard came to life, opening to businesses and the public and becoming an internationally recognised beacon for modern London.